When I was your age, I was an education student at Kenyatta University. One semester, our history of education professor gave us an assignment, which was to write a term paper on the impact of different government commissions on Kenyan education.

I took the assignment seriously. I read a number of books on the topic. I even typed and printed my paper, which was a big deal, because there were very few computers available for students. However, I was fortunate to have a father with a computer that looked like a huge carton. So to type my assignment, I had to go home. I then printed the work and even paid to have it bound.

One of my classmates looked at all my effort and laughed. She said to me: what’s the point of putting all this effort into the assignment? I’m just going to copy someone else’s work, and I will still get an A. END_OF_DOCUMENT_TOKEN_TO_BE_REPLACED 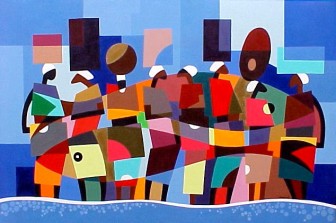 Over ten years ago, when I was a graduate student, I received a small beautiful card in the post, and in it was a handwritten note from one of the faculty in the department where I was. In the note, he said that he loved me, that he couldn’t stop dreaming about me and he wanted to make love with me. So could we go on a date?

Honestly, I thought it was a bad joke, so I tore up the letter and pretended that nothing had happened. END_OF_DOCUMENT_TOKEN_TO_BE_REPLACED 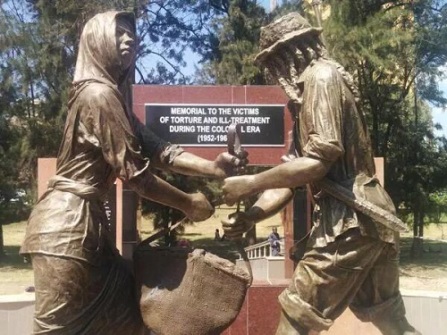 Scholars of public history and national memory tell us that monuments are arenas for competing historical narratives. Public monuments, mausoleums, museums, galleries, exhibitions, street names and names of buildings are all trophies belonging to the winning teams in history. They do not and perhaps cannot record an all-encompassing history, but only the specific version of history that is authorised by the winners. Every narrative has its narrator, and public history is the story of the hunter; lions seldom write the scripts that are enacted on the stages of national monuments and museums. Of course, heads, skins and claws of lions often line the walls where hunters live. But this display should never be mistaken for co-authorship. It is still the hunter who decides which parts are to be displayed, where, when and for how long.

It is within such a critical framework that we need to discuss the new Mau Mau monument launched by the UK government at Uhuru Park’s Freedom Corner, in downtown Nairobi, last Saturday. The monument is the “final instalment” in the 2013 out-of-court settlement for Mau Mau veterans who suffered torture and illegal detainment in the hands of colonial officials during the infamous State of Emergency, 1952-60. Crafting “special” emergency regulations in order to quash the Mau Mau insurgency, the colonial state in Kenya backed by British troops specially deployed in response to the insurgency, incarcerated tens of thousands of Mau Mau suspects, often without charges, and inflicted brutal torture on them.

Underneath the surface of the out-of-court settlement that was announced in June 2013, lies a deep history of denial and evasion by the UK government. Since the achievement of Kenya’s independence in 1963, the British government had refused to take responsibility for the brutal torture and illegal detainment of Mau Mau suspects, on grounds that independence meant Kenyatta’s government had inherited Britain’s legal responsibilities in Kenya. This diversionary tactic ensured that for more than half a century, the UK government did not pay any kind of compensation to Mau Mau veterans. But all this changed in October 2012 when the London High Court, in a case brought before it by the Kenya Human Rights Commission, ruled that there was sufficient evidence to sue the British government for crimes committed against Mau Mau suspects during the struggle for Kenya’s independence. Fearing that this landmark ruling would result in hundreds and possibly thousands of individual Mau Mau litigations being brought against it, the UK government quickly opted for an out-of-court settlement with the Mau Mau War Veterans Association.  The settlement agreed upon was £19.9m that has already been paid to the veterans, though some claim to not have received their share, and the Mau Mau monument that was launched last Saturday.

The carefully-worded epigraph on the new monument betrays this long history of denial and the politics surrounding the memory of Mau Mau. It reads, “Memorial to the victims of torture and ill-treatment during the colonial era.” The ambiguity of the epigraph is not accidental; inconvenient truths such as who authorised and conducted the torture, who the victims were, and why they were tortured are omitted deliberately. This intentional vagueness was similarly used when William Hague, Britain’s Foreign Secretary, announced the settlement before the British parliament in June 2013. Rather than offering an official apology, Hague noted that the British government “sincerely regretted” what had transpired in late colonial Kenya. And so just like in the epigraph on the new monument, the British government again refused to accept liability in its official statement announcing the settlement.

It is therefore hypocritical of the British High Commissioner to Kenya, Dr. Chris Turner, to talk about the significance of the monument in reconciling the British government with her Kenyan counterpart, and with Mau Mau veterans. The foundations of such a reconciliation project can only be laid with a genuine admission of liability and a sincere apology by the British government. To be sure, no amount of money or number of monuments can fully compensate Mau Mau veterans for the beatings, castrations, rapes and trauma experienced during the anti-colonial struggle. But a forthright statement of apology, devoid of clever wording and evasiveness, can serve as a soothing balm for their festered and decades-old wounds.

In conclusion, Kenyans too have a role to play in the quest to compensate Mau Mau veterans. The Kenyan government, for example, has promised for years to provide free social services to Mau Mau veterans, but this has never been realised. In addition, justice for Mau Mau veterans must go hand in hand with justice for the history of the Mau Mau movement. Kenyans must play an active role in the collection and preservation of not just Mau Mau history, but Kenya’s colonial history in general, as this generation of Kenyans who lived through colonialism continues to diminish rapidly. Scholars, journalists, religious organisations, artistes and musicians all have a part to play in pursuing this kind of collective justice. Only then can the lions truly tell their tales.

Today I watched my friend Willis Raburu interview Attorney General Prof. Githu Muigai in the on-going Citizen TV series, Newsmakers. During the interview, the AG noted that his youngest son is currently studying film production. He did not say where, but it is more than likely that his son is studying in Europe or North America. Raburu’s interview with the AG reminded me of an observation I have been making for some time now. It is only the children of Kenyan elites who have the privilege of pursuing careers in the creative arts. Think about it. Lupita Nyong’o, daughter of long-time politician Prof. Anyang’ Nyong’o, holds a Masters in Acting from the Yale School of Drama as well as a Bachelors in Acting and Film Production also from a North American university. Muhoho Kenyatta, the 18-year old son to President Uhuru Kenyatta, owns a successful fashion and design company, yet he is still a student at Peponi School.

Over a decade ago, the Ministry of Education scrapped Art, Craft and Music from the curriculum of public primary schools in Kenya. Yet, the same breed of senior government officials who formulated this policy continue to take their children to Peponi, Cavina and other high-end schools where student toys are clarinets and trombones; weekend assignments consist of attending the Nairobi Jazz Festival; and end-of-term trips include visiting prestigious galleries and exhibitions in Paris.

Class inequalities in Kenya’s education system are so rampant that careers in the arts are restricted to the children of elites. One must be born on “the other side of Uhuru Highway” for them to afford to dream about music, film, theatre, literature and art as career options. That’s why every December, when K.C.P.E. results are released, the top students always want to become the same thing when they grow up: a neurosurgeon, aeronautical engineer, or slight variations of these. Kenya’s public education system is killing the creativity and life of our children by teaching them that true success can only be achieved in the hard and social sciences, though the latter is less prestigious. The true measure of success in our education system must be the breadth and depth of dreams that our pupils and students have. The catastrophe of Kenyan education is painfully evident when children in Eastlands and rural Kenya confess that they cannot “afford” to be musicians or actors because there are no jobs in those fields—the same kind of rhetoric spewed by their parents and teachers. To be a child is to be able to dream. We are dehumanising our children by denying them a chance to dream. To dream that they can become anything they want.

It is important to note that this is a structural problem and thus no amount of individual or organisational philanthropy can address it. Safaricom Jazz Festival and Coke Studio can sponsor all the music platforms they want—and they have profit-driven motives to do so—but this can never replace the need for the Kenyan government to invest in the proper training and education of art professionals. I have met many actresses at Kenya National Theatre who are more talented than Lupita Nyong’o, but they will probably never win an Oscar. This is is because their theatre training only went as far as attending the annual Drama Festivals in high school. Most of us can remember fellow students in our high schools who only came alive during Drama and Music Festivals or sports season in the academic calendar. They enjoyed the “extra-curricular” activities more than they did the “curricular” ones. Sadly, it is only children in Eastlands and rural Kenya who operate within this artificial binary of what is curriculum and what is not. Students in Cavina, Peponi and St. Andrews Turi can take subjects like theatre and public speaking. They can also practise horse-racing and archery depending on the sport that is in-season.

The Kenyan government through the Ministry of Education must invest in the arts and sports. Of course, this will only be possible after an ideological transformation in government and society at large. So the next time President Kenyatta makes a mushy statement about Lupita and Kenyan patriotism, someone please remind him that children in Ndururuno Primary School in Huruma would also like to afford acting as a career.

What do you feel? END_OF_DOCUMENT_TOKEN_TO_BE_REPLACED

This discussion is a continuation of Curtis Reed’s workshop on The Soul of Sex workshop. The gist of the discussion is that experiencing our sexuality in righteous ways requires:

The discussion uses various scriptural references and poems by people of the African descent from the continent and it’s diaspora. It also addresses contemporary issues such as how to deal with sexual temptation in the university classroom setting.

A copy of the same discussion in pdf can be downloaded here.

END_OF_DOCUMENT_TOKEN_TO_BE_REPLACED

On October 8th 2014 at Daystar University, Athi River campus, Brother Curtis led us in the discussion of the thoughts he had earlier shared on September 23rd during the chapel hosted by the university’s Compassion and Care Center (DCCC). Below is a loose transcript of what he said. The text is not completely verbatim, but is, I believe, faithful to the spirit and gist of what Curtis shared. A copy of the same discussion in pdf can be downloaded here. Blessings, Wandia Njoya. END_OF_DOCUMENT_TOKEN_TO_BE_REPLACED

Fear is real.But thats all it is. Nothing more… END_OF_DOCUMENT_TOKEN_TO_BE_REPLACED

The people daily newspaper.
Isn’t she lovely looking all funky in ankara print and yellow pants? 🙂 🙂

We appreciate you mwalimu!!